The bush fires across the country may trigger employee entitlements, under the NES or their award. Such as annual, personal, community service, and special paid leave. Employee may also request to ’cash out‘leave to assist financially or request flexible/changes working arrangements.

Separately, bushfires may create ongoing and heightened workplace health and safety obligations, which are unlikely to have been considered in a general WHS management scheme).  This might trigger a need for employers to undertake risk assessments and put in place control measures in relation to work that does not ordinarily require it – particularly for employees who may have a susceptibility to health risks arising from air quality issues.

In December 2019, the Federal Circuit Court found that a construction company that told a patcher he could not work on projects covered by union agreements and would be subjected to pay rates which ‘sucked‘, had coerced the patcher into rejoining the CFMMEU.

The patcher had quit the union in December of 2017 after being ‘disgusted’ at what he believed to be an inadequate response to alleged safety deficiencies on the Jewel Project in Surfer’s Paradise.

The judge found the patcher to be a ‘witness of truth‘ and determined that the construction company’s mere raising of’union dues’ to the patcher was enough to place pressure upon an employee. Further, multiple references to reduced pay, workplace and union politics, and ‘other jobs out there’, amounted to unconscionable and illegitimate conduct to the point of coercion.

The Fair Work Commission has upheld the dismissal of a financial controller paid an annualizsed salary of $114,975 for a 34-hour week, but who paid herself over $14,000 in ‘overtime’. Commissioner Simpson found it was clear that her annualised salary included compensation for all hours worked.

When Orbitz Elevators discovered the overpayment, they launched an investigation which concluded with a summary dismissal, stating in the letter that the employee had defrauded them. In response, the employee claimed the allegation of serious misconduct was ‘baseless and malicious’ and brought an unfair dismissal claim.

Commissioner Simpson expressed his concern that she believed she was entitled to such payments under an annualised salary, despite her considerable experience and qualifications, finding in favour of the Orbitz Elevators.

Despite having an employee attend over 99 training courses in a period of less than 3 years, the FWC found that Bendigo Bank was not entirely blameless in a teller’s alleged ‘fraud’ and reinstated the employee.

The senior teller was summarily dismissed by the bank in April 2019, and an investigation concluded that she had copied and ‘altered’ a customer’s application in order to open a second  requested account, in breach of protocol. The teller asserted she had done so to address an error where a second account needed to be opened for the customer, and after having sought held from an internal helpline. Commissioner Gregory decided that despite the extensive training, the teller could not be expected to ‘recall in great detail’ the relevant protocol. The Commissioner determined that providing training did not necessarily absolve the bank from responsibility for mistakes and it was difficult to conclude that the teller’s dismissal was “proportionate” to her misconduct. The employee was reinstated with no payment of lost wages. 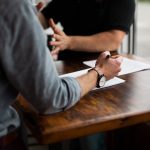